The Future Has Arrived

When the first Breeders Halter Futurity takes place later this year, it will mark not only the premier of the richest halter competition in history but also a truly unique opportunity for amateurs to compete for an unprecedented amount of payback. This competition boasts an annual guaranteed added purse of $250,000 for a minimum of four years. Half of this guaranteed purse, $125,000, will go to the amateur weanling halter classes each year with the remaining $125,000 designated for the amateur yearling halter classes.

The bold, forward-thinking concept for this type of competition was developed by a group of the industry’s most prominent stallion owners. Their goals are to create more interest in the halter horse industry by bringing back the middle market, to provide an opportunity for the public to show for more money, and to establish an event outside the various breed world shows with the potential to expand.

Members of this prestigious group of stallion owners include Chad Beus, Steve Beus, Terry and Phyllis Bewley, Terry Bradshaw, Monte & Anna Horn, Wayne & Erin Jeffcoat, Steven Jensen, Lisa King, Rancho Poco Loco, Clark Rassi, and Bitter Lake & Snow. And the elite stallions they have nominated to this new program represent the epitome of excellence in halter accomplishments both as individuals and as sires.

Stallions whose foals of any breed are eligible for the 2011 Breeders Cup Futurity include Fearles, Hear The Cheers, Self Employed, Kid Coolsified, My Intention, Sierras Tribute, The Home Run Kid, Top Secret, PTMA Star Kid and Western Gunslinger. In 2012, TD Kid will replace Sierras Tribute in this all-star lineup.

There are several other unique aspects of Breeders Futurity that should be of particular interest to amateur competitors and breeders alike. To ensure the integrity of the competition, the stallion owners have agreed unanimously that they and members of their families are not eligible to show in the futurity, other than in a Get of Sire class which might be added in the future. In addition, foals owned by the stallion owners at the time of the futurity are not eligible. Should a question about legitimate ownership arise, proof of legitimate transfer will be required, and any violation of this rule will result in the stallion being permanently removed from the program. A complete set of rules, all geared to the benefit of the amateur owner and breeder, will be available for publication in the near future. 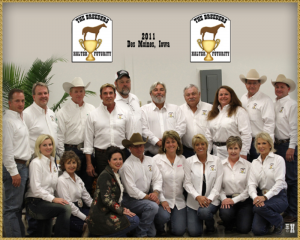 See All
Next Article